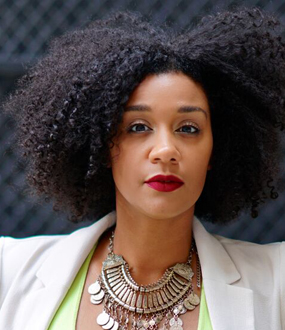 Have you seen Evita speak? Leave a review.

Evita Turquoise Robinson graduated from Iona College in 2006 as her undergrad Commencement Speaker, and now holds a Board of Director position with their Alumni Association.

Since her first taste of Europe at the age of twenty-one, Evita Robinson (Evie), has been to over twenty countries and lived on three different continents. After a year and a half of traveling around the world, she put her degree in Television/Video Production to use, videotaping her life on the NomadnessTV web series. Evie came back to New York on a mission to bridge her love of production and a newfound need for travel.

In September 2011, she created the Nomadness Travel Tribe, an online social community for travelers all around the planet, who have the similarity of an urban background and were looking for likeminded travelers to connect with around the world. Nomadness was the first of it’s kind targeting diverse millennial travelers, in the newly coined ‘urban travel movement’.

From the success of the online group, Evie thrust herself into the world of entrepreneurship, and in April 2012, launched the business home for all things Nomadness and travel oriented, Nomadness LLC. The group now currently surpasses 15,000 international members, with over 100,000 passport stamps, and nearly 100 meet ups a year. May 22, 2015 Nomadness launched the travel web docuseries, The NOMADNESS Project, Co- Executive Produced by HBO’s Issa Rae and Evita, housed on her YouTube channel of over 200,000 subscribers.

The continuation of innovating the urban travel space has landed Nomadness in the pages of The New York Times, EBONY, ESSENCE, Entrepreneur.com, The Daily Beast, Huffington Post, Mashable.com, airtime on CNN.com and News One, Facebook Stories, NBC4NY, MSNBC’s former Melissa Harris Perry Show, and as a travel expert regular on the tri-state area’s award winning PIX11 news out of New York City. To date, one of the biggest campaigns Nomadness has been featured in, was with Evita as a part of Oxygen Channel’s ‘In Progress’ during Black History Month 2016.

Nomadness spearheaded #NMDN in September 2015, the first alternative travel conference of its kind, targeting diverse urban millennials and has turned it into an annual conference in New York City for this travel demographic. Information can be found at nmdnconference.com.

Previously, while in New York City, Evita worked in television and film production. Her resume included production work with names such as A&E, HBO, MTV, BET, BBC, TURNER, the reality travel series JET SET ZERO, and Spike Lee’s 40 ACRES AND A MULE FILMWORKS. She now serves as a keynote speaker, mastermind behind online courses, and continues her love of seeing the world with Nomadness, while writing her first book.

Bring Evita Robinson to Speak Live at Your Event