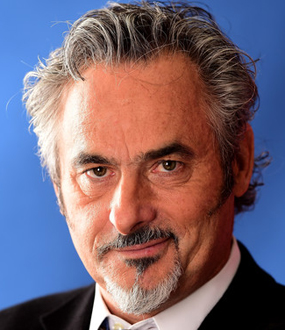 Golf’s most in-demand commentator and analyst, David Feherty breathes new life and depth into a sport that’s not typically known for lively action. Not only is the popular broadcaster bringing golf to new audiences, he is a fervent advocate for U.S. troops and individuals striving to overcome depression and drug addiction.

Funny-man Feherty enjoyed a lengthy career as a successful pro-golfer, seizing ten victories worldwide. In 1997 he traded in his clubs for a microphone, happily accepting a position as CBS’s golf reporter and analyst, revealing that the only thing he liked more than golf is talking about golf. Feherty’s colorful personality and verbal wit quickly made him a fan favorite, leading to the launch of his own television show, Feherty, on the Golf Channel. In 2015, he made the move from CBS to NBC, where as of 2016 he will be a full-time contributor to the network’s golf coverage.

Outside his media career, Feherty has a respected reputation for trying to make the world a better place. He has gone to Iraq to entertain U.S. troops various times, an experience that moved him to cofound the non-profit organization, Troops First Foundation. Feherty and cofounder, Rick Kell, have created several programs and specialized events designed for Wounded Warriors and their families that address relationship building, mentoring, reintegration, and looking forward. In 2014 he received the Distinguished Citizen Award for his relentless efforts to improve the lives of U.S. troops and their families.

David Feherty discusses how the media coverage of military interventions in Iraq and Afghanistan did not line up with his personal experiences there. He details that news channels wrongfully covered the soldiers in negativity, while neglecting to capture the dignity and honor they demonstrated in the line of duty.

“I was dumbfounded by the scale of the operation and what wasn’t being reported,” Feherty relates his experiences in Iraq. “The restraint that our young men and women show on a daily basis when they don’t pull the trigger. The compassion they have for the women and children of Iraq and Afghanistan. They act like Americans.”

Bring David Feherty to Speak Live at Your Event 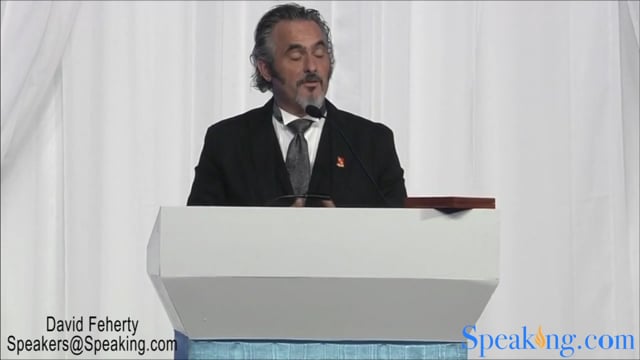 Hilarious and outspoken, David Feherty brings joy and smiles to audiences across the country. In addition to being one of golf’s most prominent voices, Feherty is one of the strongest celebrity advocates working to raise awareness on bipolar disease, drug addiction, and the conditions and challenges facing U.S. troops in the line of duty as well as when they return home. Feherty speaks where he thinks he can make a difference: he has been the keynote speaker at several fundraisers benefitting various charities such as the Ronald McDonald house and rehabilitation centers.

A Nasty Bit of Rough
Sports speaker David Feherty discusses life as a golfer and commentator, using humor to discuss some of the more comical moments from life on the PGA Tour. David talks about funny stories and players on the PGA Tour, his playing career and being on the European Ryder Cup team. He uses humor throughout the speech.

The World According To David Feherty
A look into the heart, as well as the head and life, of golf's sharpest wit. 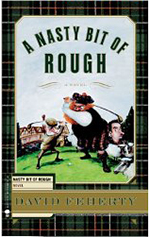 A Nasty Bit of Rough
Meet a character only David Feherty could create, Major General (Ret.) Sir Richard Gussett, his riotous imaginary uncle who presides over “Scrought’s Wood,” the world’s most cantankerous golf club. In this first volume of his misadventures, Gussett sets his sights on the most prestigious prize in golf, the petrified middle finger of St. Andrew, patron saint of Scotland.

Gussett must motivate his merry band of members through battles with incontinence, single malt Scotch, peculiar handicaps, and a litany of other unmentionable afflictions in order to seize the finger in a “friendly” competition with their ancient rivals, the dreaded and notorious McGregor clan.

Feherty’s fanatical fan base will rejoice, the driving range addicted will tee off, the USGA will have “no comment,” and anyone who loves the game or knows someone who does will be unable to resist Feherty’s storytelling and golfing gravitas.

The Power of Positive Idiocy
From David Feherty, the notorious ex-pro and golf commentator at CBS Sports, comes a hilarious new collection of rants sure to surprise and crack up hackers everywhere.

In The Power of Positive Idiocy, readers will be treated to Feherty’s distinctive commentary on aging, Texas, women on the golf course, the Irish, parenting, addiction, Charles Barkley, and, of course, every pro golfer and golfing situation you’d ever want to read about. He also graciously (or in some instances unforgivingly) answers his fans’ questions and passes on his unique and demented perspective. Don’t say you haven’t been warned. 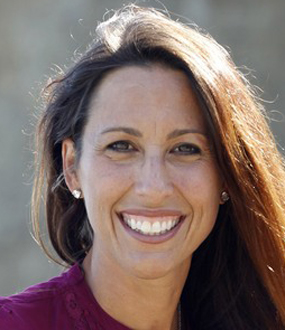 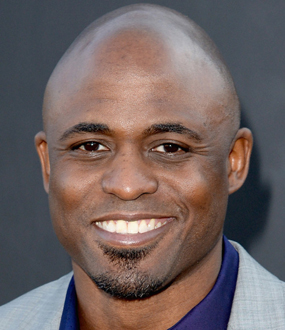