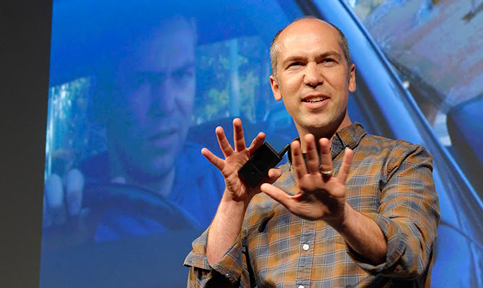 Named “One of the Most Interesting People in Los Angeles” by LA Weekly, innovation keynote speaker Dan Goods created his own dream position as “Visual Strategist” at NASA’s Jet Propulsion Laboratory. Dan, along with his team of developers, creates works that help transform complex concepts into something that can be universally understood. Their work can seen in public spaces, art museums, as well outer space. Using his unusual journey as a guide, Goods’ keynotes explain how innovation, passion, and creativity can be unleashed to understand what it means to be you and what it means to be human.

What I always try to do is look for the essence in a product, a place, or a person and let that essence help me tell their story in a unique and powerful way that people will remember.

SPEAKING.COM: You have described your work as, “…developing creative ways of communicating, and working to transform complex concepts into meaningful stories that can be universally understood.” Would you please expand on what this means to you and how it translates to your audiences and/or meaningful applications?

GOODS: Everyone has a story to tell, and more often than not, those stories are getting more and more complicated. What I always try to do is look for the essence in a product, a place, or a person and let that essence help me tell their story in a unique and powerful way that people will remember. In my talks I go through a number of those communication challenges and how I went about solving each one.

SPEAKING.COM: How did you discover that you could apply your artistic skills to the scientific field?

GOODS: I had the incredible opportunity as a student at Art Center College of Design to intern with an artist who was working at the California Institute of Technology helping scientists visualize the vast amounts of data they collect. Considering my educational background, this was the last place on earth that I imagined being able to spend my day.

However, I got hooked. That summer exposed me to some of the smartest people working on the biggest scientific questions that humans are asking. I wanted to be around people like that all the time. I realized that I was pretty good at taking the complicated ideas they were trying to tell and communicating them in compelling ways, but I had no idea how I would ever get a job doing such a thing.

SPEAKING.COM: What led you to become the “Visual Strategist” at NASA’s Jet Propulsion Lab?

GOODS: Initially, JPL was not looking for someone like me. After graduating from ArtCenter I was trying to see if I could find a job at a research center. I got to meet the Director of JPL and had two seconds to sell myself to him. I asked him, “Wouldn’t it be great to have artists and designers helping JPL imagine future space missions?” He said that would be great, but then walked off to his next meeting.

It wasn’t until I sent my resume in a huge next day air envelope that he realized I was serious. JPL looked at some of the strange work I did at art school including a pipe organ made out of soda pop bottles, and they thought I would fit right in. I was a given a 6 month probation period, and 15 years later I’m still there.

We have crazy one-of-a-kind things we are trying to accomplish, so we really have to stretch our creativity to figure out how to do them within the confines of all the rules and gatekeepers.

SPEAKING.COM: What do you find most challenging about your position as a Visual Strategist?

GOODS: As with any large institution there is a lot of bureaucracy. In government there is even more, but I take it as a challenge. We have crazy one-of-a-kind things we are trying to accomplish, so we really have to stretch our creativity to figure out how to do them within the confines of all the rules and gatekeepers. Though we have many successes, we always feel like we had to move mountains to accomplish them. Fortunately we’ve built a lot of trust and people want to help us succeed.

SPEAKING.COM: How has this position evolved over time?

GOODS: The first 8 years of my career at JPL I was on my own and never knew if I would have a job at the beginning of the next fiscal year. Eventually I was able to hire someone, and then in the past 3-4 years I have been able to build a team of 8 full time staff plus a network of world class freelancers. As a team, we have been able to change the culture of JPL from one in which no one knew “why artists and designers should work there” to “now we don’t have enough capacity to help everyone who asks”. It has been a joy to see the team branch out to the point where we are now embedded in every area of JPL from the communications to brainstorming future missions to working with facilities and security.

SPEAKING.COM: Of all the projects you’ve created for NASA, which is your favorite, and why?

GOODS: “Hi Juno” was an amazing opportunity to coordinate thousands of people around the world to hack a spacecraft called Juno and say “HI” to it as it was flying by our planet on its way to Jupiter. Everyone had to coordinate and use Morse code exactly at the same time. You might not expect this, but I can’t tell you how many people cry when watching the video. It was a special chance to bring people together to do something that became very meaningful to them… and now, Juno is at Jupiter 🙂

A scientist who uses the Hubble telescope looked into the microscope, looked up at me, and said “You have reminded me why I work here.”

SPEAKING.COM: Of all your projects, which has resonated most with audiences?

GOODS: Probably “The Big Playground”. In recent years, scientists have been finding thousands of planets around other stars. This was really hard for me to wrap my head around ten years ago as they had only found a few hundred at the time, but the opportunity to find more is vast and I wanted to express that.

So I took a single grain of sand and had someone at JPL drill a hole (using a carbide drill bit) into it. The hole was 10th the size of the grain of sand! The sand represented the Milky Way galaxy which has hundreds of billions of stars. The hole is where we live, but it is also where we have found thousands of planets around other stars. In the coming years, we will find tens of thousands more in just that little area, let alone the rest of the galaxy. If you want to get a sense of all the other galaxies that we know about you need 60 rooms full of sand.

For “The Big Playground,” I put a lot of sand in a room and you can see the grain under a microscope… My favorite moment tied to this project was when a scientist who uses the Hubble telescope looked into the microscope, looked up at me, and said “You have reminded me why I work here.”

SPEAKING.COM: What message do you hope to communicate with your installations?

GOODS: I want to bring a little bit of awe and wonder to people’s lives. I try to pull them away from the everyday to give them perspective on their lives and what they will do next.

SPEAKING.COM: What scientific concepts/theories would you like to create an installation for that you haven’t yet?

GOODS: There are these giant lines and drawings in South America called the Nazca Lines. They are so big that you can only see them from the sky, but they were made thousands of years ago, before people could fly (we think). If true, someone spent a lot of energy making beautiful things that no one would ever get to see. It makes me wonder if I could create a message that is undetectable with current technology, but perceivable in the far off future.

SPEAKING.COM: What is the “Museum of Awe” and why did you launch this project?

GOODS: It’s a new kind of experience. It’s not a museum of objects, but a museum of experiences. It’s a mixture of art, science, theater, food, and surprise. Our goal is that by the end of our experience you will be reminded of what a gift and privilege it is to be alive. It’s a pop up experience that will be found in the least expected places like an abandoned building, an office in a skyscraper, or a salt mine. My buddy David Delgado and I are building this idea because we want to give people the tools to see the awe and wonder that is all around them, something that we feel is needed now more than ever. 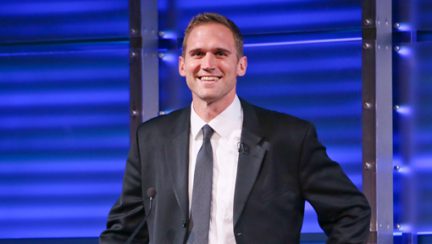 Stepping Outside Your Comfort Zone, with Motivational Speaker Lance Allred 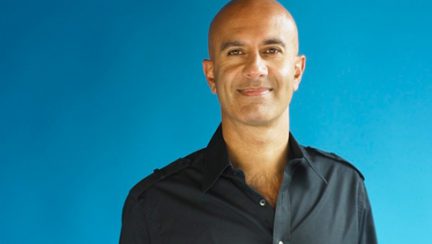 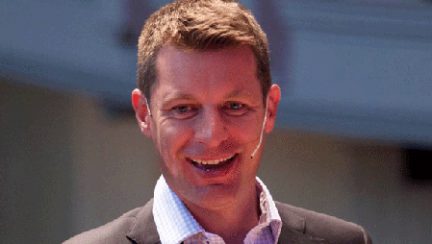 How Music Can Boost Corporate Performance with Ben Hines